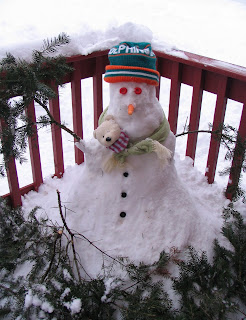 As a New Englander and as a lover of nature and whimsy, I am fully embarrassed to admit that I have never — in my 34 years of life — created or participated in the creation of a snowman or snow-woman. Apparently, this is a fact that I have never shared with my husband — of 13 years — until this weekend. I think that he is now wrestling with shock and pity. Apparently, he had a dad that thoroughly enjoyed making a snowman after each snowfall. I, on the other hand, had Bob (some of you know exactly what that means and know that I still love him dearly despite his lack of parenting skills).
Anyway, I decided long ago that I was going to be the sort of parent that could shock & awe my son with all sorts of amazing and “cool” skills …. i.e. fort defending, sled racing, firefly catching, and snowman building (not to mention cooking, cleaning and laundry). So, this weekend — when the snow was just right, the weather was gorgeous, and Daddy was away working (I didn’t want him around to show up my skills) — I decided that it was a great day for building a snowman with my son. And though I had never done such a thing before, and never even seen it done, I thought it was a “no-brainer”. So … Isaac and I took to the outdoors… and I began to pile snow. I mean, I literally just began to pile snow. 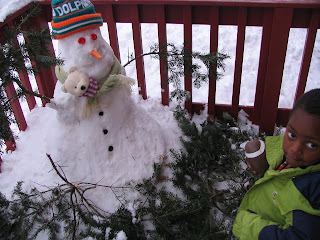 I piled and shaped, and piled and shaped and then piled and shaped some more. And Isaac wanted no part of it. In fact, he wanted to go indoors “to watch dinosaurs”. I kept reassuring him that Mommy was building a snowman and that we were having fun. I asked him to join Mommy in her pile building. He continued to want no part of it, and just kept staring at me as though I was some kind of jack*ss. And I would later find out that I was indeed a jack*ss, because one does not build a snowman by piling up snow and molding it into a volcanic shape. But I didn’t know that then, and just kept telling Isaac that Mommy was trying very hard. This turned out to be a mistake — because every time that I would stop to take a breather from shaping this alien-looking structure that continued to fall apart every couple of minutes — Isaac would admonish me to “try very hard Mama!” To which I would reply with some ridiculous remark like, “Well if you are so great … then you build this fricken snowman!” Good times …. Good times. 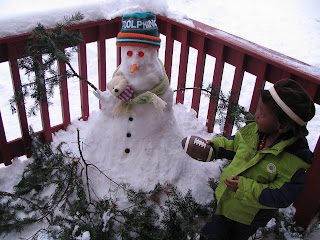 Well, after much work (on my part only), the snowman was finished. He looked a little strange to me, but I let it go. Then Daddy came home. And Isaac showed him his snowman (as if ). And Daddy laughed. And I proudly stated, “Not bad for someone who never built a snowman before, eh?” And Daddy thought I meant Isaac. You can imagine his delight in picking on me when I told him that I was talking about me. Then he felt some pity for the woman he loves … and he told me that he would show me how to build a proper snowman one of these days. 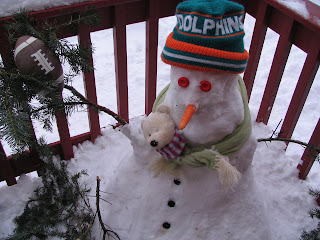 Fat chance of that happening though … because I took a little visit to YouTube and stocked up on some “How To Build a Snowman” videos because I want to be the cool parent who knows how to create all the cool things. Apparently, I am not the only person in need of some help, as there were plenty of videos to choose from!
However, I guess it might go without saying that when Daddy discovered I was checking out YouTube for snowman making tips, he felt even more pity for me.
Anyway, if you need them, there are some here and here. And before you can even ask, YES I know how to make snow angels. But if I didn’t, I could learn here.
Enjoy.
Love,
Jodi
Tweet