My sweet boy Isaac has always loved Princesses. This has caused some concern in my extended family — but not with us. He is a tender boy who finds beauty, solace and wonder in fairies and princesses. And we are thankful for it. He is also a boy who loves smashing cars and fighting pirates. So, we are glad for his well-rounded sense of gender identity as well.

Tinkerbell has always been his favorite. He loves to dress up as her … with wings and wand … and fly around the house performing magic. Once, while fluttering about the living room, he asked me to call his Poppy to tell him that he (Isaac) was a beautiful Tinkerbell … because, as he said, “Poppy will be so proud of me.” Well – I made the phone call and Poppy tried to be proud.

So, when we reached the Magic Kingdom, we were hoping to get a glimpse of the “full-sized” Tinkerbell … but the line was 45 minutes long … and we had already had an opportunity to say a brief Hello to the pint-sized Tink at the Tinkerbell’s Treasures shop (Isaac rang a bell and called out to her … then she flew in and made an appearance that was most believable). However, the line to meet the Disney Princesses was just 15 minutes long, so we waited in it … fully appreciating that Isaac was the only boy in either line.

Well – thank goodness we made the decision to meet these lovely ladies, because it turned out to be one of the highlights of our entire trip … 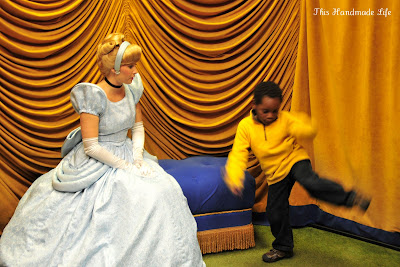 She was most delighted and said that the kingdom could always use another strong prince like him. So, he went on and on telling her about how strong he was and how he would keep the bad guys away from her because she was such a nice lady. (What a proud Mama I was — thinking that one day he will grow up to want to protect his own lovely lady 🙂 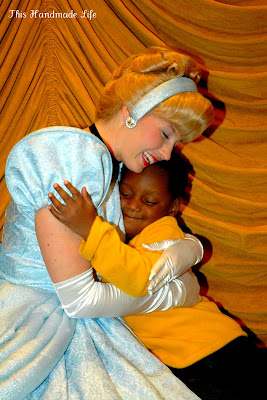 Cinderella really enjoyed him and their embrace was so genuine and beautiful.

Then, Mr. Isaac (pumped from his date with Cinderella) went on to meet Belle …

He also explained to her how he would protect her. He told her about some of the rides he went on … complimented her on her pretty yellow dress … and enjoyed a lengthy and substantive conversation with her. It was obvious that that they were both quite taken with one another (remember, he was pretty much the only boy they saw that day – as told to me by Cinderella).

Next, Isaac went on to meet Princess Aurora (Sleeping Beauty) and enjoyed a conversation with her regarding the beauty of her hair (initiated by Isaac)…

They talked of Prince Philip, her fairy godmothers and some other polite conversation (no discussion of rescuing her from pirates or bad guys). And again, it was a most delightful visit.

BUT then Isaac needed to say good-bye as it was time to leave the Princess room and head back outdoors to the Magic Kingdom. This was near torture for him. He – in his normal, everyday life – does not do well with goodbyes. He avoids them by just walking away, crying, or pouting. He has a hard time when his friends have to leave, etc. We know this must have so much to do with some deep-rooted abandonment issues related to adoption (issues that he doesn’t even know or understand as he was just a day old when Marjorie brought him to the orphanage). So, when Mama was telling him that it was time to go … he just fell apart sobbing ….

Until Belle came to the rescue … 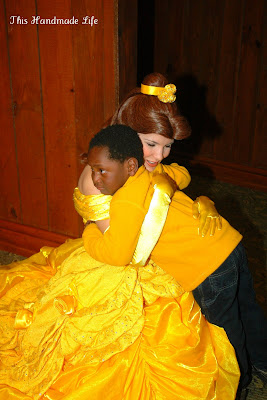 She was so lovely. She held him and told him that she loved him … that she would always be here for him … and how thankful she was that he came to visit, etc. She took time away from other guests (sorry other guests) to make sure that he felt better about leaving … as it was only temporary and she would see him again. It was pure magic. Isaac felt so special. And he was able to leave in peace. Now Belle is his favorite princess in all the world. Of course. And mine too. Thank you Miss Belle – may your kindnesses be rewarded ten-fold.

These brief but meaningful meetings with the Disney Princesses are now forever in Isaac’s heart. And as far as I am concerned – those visits are worth every dime I spent on this trip.

I hope you enjoy some magic and encouragement in your day too.