Isaac is amazing. If you know him, you already know this. If you don’t, please allow me to illuminate his awesomeness (as well as the awesomeness of the community we live in). On Sunday, June 3rd, Isaac set up his Italian Stallion Lemonade Stand in West Market Square in Downtown Bangor as part of National Lemonade Day. It was a HUGE success. He raised over $800 in 4 hours and has raised an additional $400+ in the days after. And this is how it all came together … 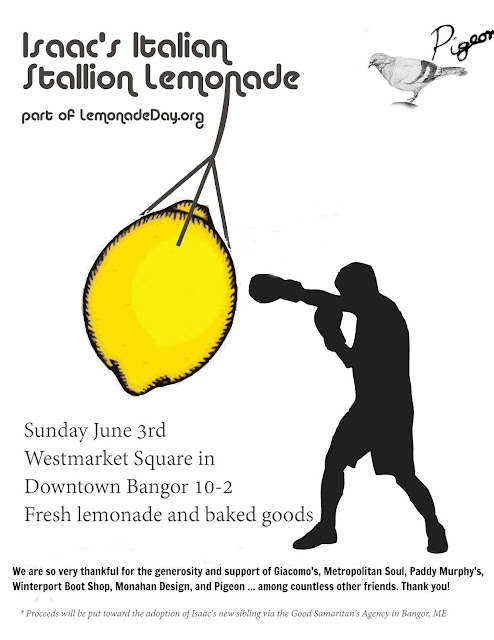 Months ago, I received an e-mail from Bangor Parks and Recreation about National Lemonade Day. I asked Isaac if he wanted to participate, and as is his usual, casual style, he simply said, “Sure”. We went to the parks & rec to sign up and receive our lemonade stand starter kit. We read through the materials together … which provided tips on setting your goals, creating your business plan, seeking investors, marketing your biz and everything else that one needs to start a new business venture.  The materials were very comprehensive, easy to understand, and really got Isaac thinking about how to proceed. But first … what was his goal? The materials provided stories about some fictitious kiddos who wanted skateboards, bikes and other goods … and how they put together lemonade stands in order to achieve their goals. I read these stories to Isaac and asked him what he would like to shoot for … a skateboard? A swing set? Legos? He said, (and I am pretty sure this is a direct quote): “I don’t really want anything more than I want a little brother.” And there it was – his goal.

Isaac wants a little brother. He has for a while. He even asked Santa. But Santa was not able to deliver such a treasure this past year. So, Isaac began to take matters into his own hands. He is adopted. He knows his adoption story very well and is fully aware that adoption is the means by which our family grows. He also knows that the adoption process can be quite expensive. And he wants this little brother so badly, that he is willing to put in the work needed to raise as much money as possible. And he is very serious about this.

Where to start? Well, Isaac learned that it often takes money to make money. We read about seeking out possible investors to help with his starting costs (stand, lemons, sugar, marketing materials, etc) … and then compiled a list of people to ask to invest in his project. I felt it was very important that Isaac go and talk to these investors on his own. He needed to look them in the eye, shake their hands, tell them about his project, ask them to help, and then ask them what he could do for them in return. Because he is 7 – and I was not sure whether he could pull this off on his own – I wrote to each potential investor ahead of time to summarize what Isaac was hoping to speak to them about. This turned out to be somewhat unnecessary. Isaac was a pro. His first meeting was a bit rocky (he was somewhat tongue tied) but the rest were smooth sailing. He set up meetings with area business folk … and each and every one of them negotiated terms with him and invested in his project. Some invested money, others invested supplies, while others invested marketing tools, etc. And all simply wanted some lemonade in return.

((( This is where I give a big shout out to those investors! Metropolitan Soul, Nocturnem Draft Haus, Giacomo’s, Monahan Design, Hannaford’s, Pigeon, Paddy Murphy’s, and Winterport Boot Shop. These businesses know what it means to be part of their larger community – please reward them for their generosity! )))

Once the funds were secured, we researched lemonade stand plans via Google … then Halis (aka Daddy) came up with his own design. Isaac and his Dad built and painted it together … and the results are pretty cool … 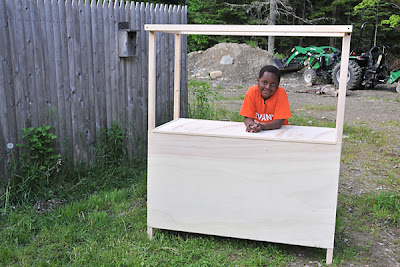 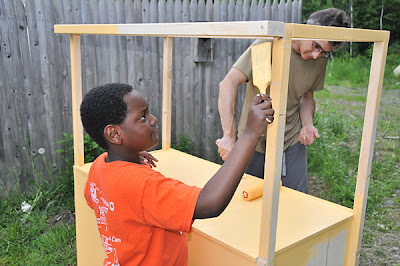 A very important part of this business venture was pulling together the theme for the stand. This also proved to be the most fun (for me at least). Isaac knew early on that he wanted a “Rocky” theme for his biz. We decided on the name: Isaac’s Italian Stallion Lemonade as well as the slogan: This Lemonade Really Packs a Punch! Isaac is a huge fan of the Rocky series … and thinks of Rocky Balboa as a true hero. His Dad and I agree. Rocky was a self-made man … with a heart of gold … and determination to see his dreams realized. What better theme for this venture?!

With the help of Brett Settle at Giacomo’s, we came up with our own recipe for a fruit punch style lemonade (it was delicious … and contained raspberry Torani syrup!). We gathered boxing motif goods and a print of the Italian Stallion himself and created what we think was a gorgeous stand. (Isaac’s grandparents stopped by during business hours to drop off a punching bag they picked up that day at a yard sale – thus completing the motif). We even had Rocky music (from all 6 films) playing from speakers inside the stand! 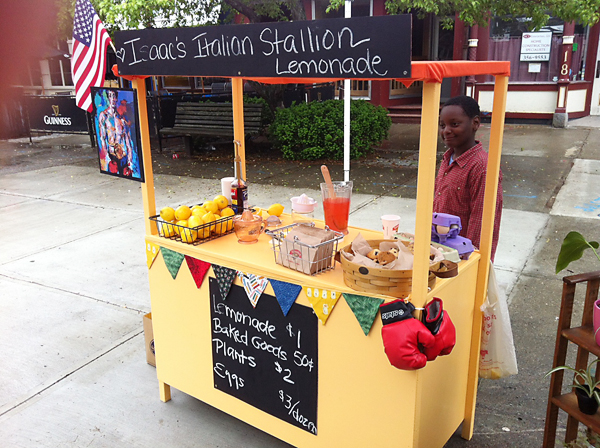 Because Isaac was determined to raise as much money as possible, we also set up with baked goods (made by me), houseplants (grown by Isaac and I), and farm fresh eggs (laid by our hens). These were all very well received by his customers. He sold out of baked goods and eggs in very short order.

The day of the event (his grand opening, if you will) was a seriously rainy day. The kind of rainy day that keeps you home cuddled in bed. But thanks to a good friend, Donna Allen, we were prepared with a tent … and ready for business. 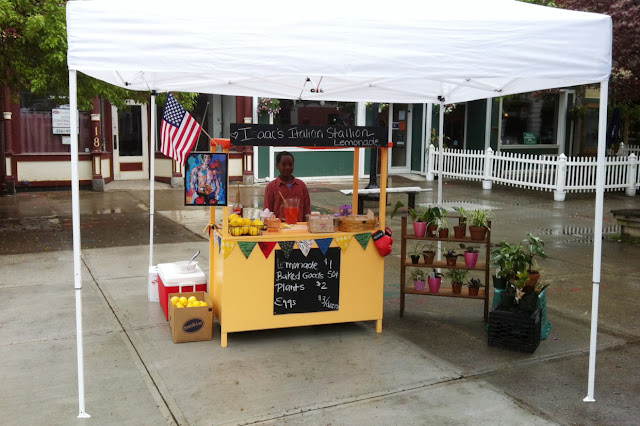 And the rain did not deter anyone! We spent quite a bit of time marketing his opening day (as well as spreading the word about National Lemonade Day) … and it truly paid off. Monahan Design created our fliers (see above) that we shared throughout the community. We also posted the event on Facebook … and invited over 1,000 community members. From there, the word quickly spread throughout Bangor. And friends at the Bangor Daily News spread the word as well. 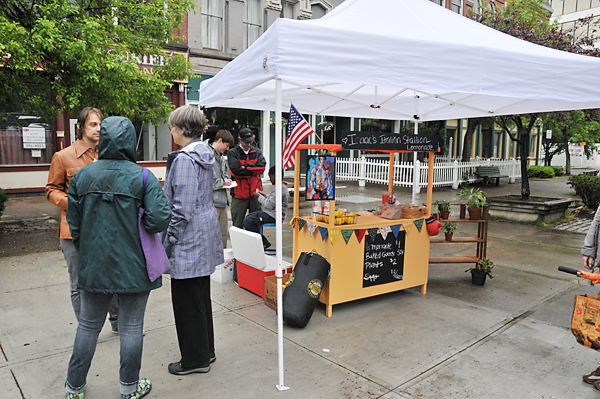 The day of the event was nothing short of amazing! Droves of people came out to support Isaac. There were lines of people waiting for lemonade – in the rain! There were hugs, laughs, dancing … and generosity beyond my wildest hopes. Some friends drove right up to West Market Square simply to run out of their cars to hand Isaac some cash for his efforts. Strangers came by with their families to support the young man who wants a little brother. Area business folks came over to give Isaac kuddos for his enterprise. It was four hours of pure joy and enthusiasm. And Isaac worked it! I mean, he was quite the business man — with excellent customer service (we spent the night before watching videos on the subject).

Isaac was so very focused on doing this well. He met every customer with a smile and a “Hi. What can I get for you today?” or a “Would you like some lemonade?” followed by “Can I get you a garnish with that (a lemon slice)?” and “Please help yourself to some pastries.” And he always ended transactions with a shy but sweet “Thank you.” He would break from his work only to hug his friends or pose for pictures … otherwise, he was fully engaged in making the lemonade, cutting the lemons, pouring, organizing, cleaning, etc. His Dad and I were so impressed. We figured we might have to occasionally get him re-focused throughout the day, but we were wrong. At just 7 years old, he had more discipline and determination than I could have expected. 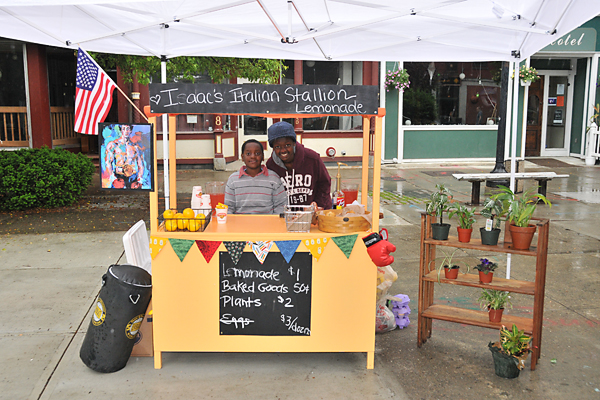 Toward the end of his shift, a local Bangor Daily News reporter as well as a local WABI camera man dropped by to interview Isaac about his fundraising campaign. Again, he impressed the heck out of us. So mature, so kind, so focused. His television piece can be seen by clicking HERE. His news article can be read HERE. (Thank you to both venues for giving this some attention). 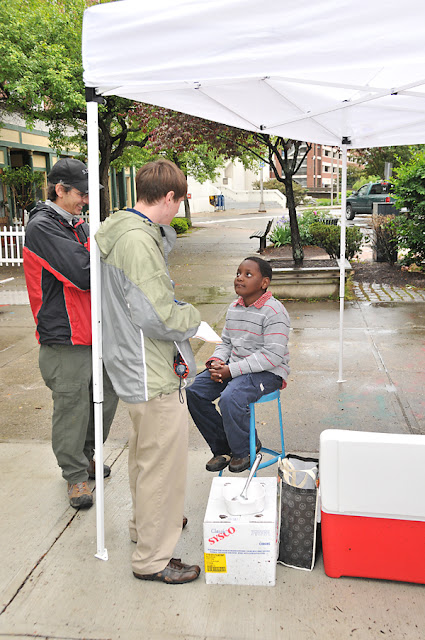 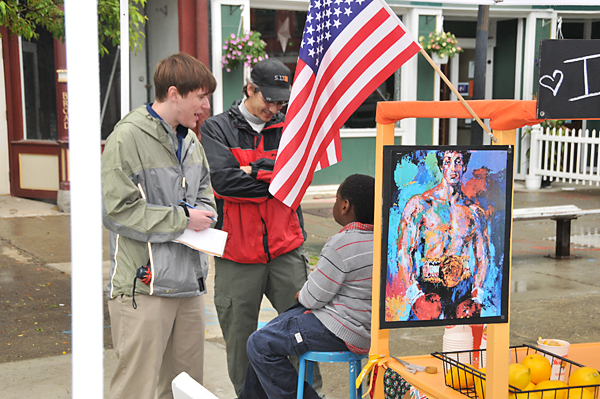 In the end – wow – what a day! I spent most of it near tears at the generosity of our community. Bangor is truly the best place to live on earth. Or at least we think so. And the Lemonade Day program is genius. Such a great way to show kids how to live the American Dream … how to set goals and how to see them through to their fruition. We were so glad to participate in this event in the community that we love. (A hearty thank you to all!)

Isaac worked hard to raise $868 on Lemonade Day. His goal was $1500 – the cost of an adoption application/home study at the Good Samaritan Agency in Bangor. And though he was very happy to raise over half of his goal that day, he was over the moon to discover that our mailbox was full of envelopes from around the country throughout the following week. Folks who read the article online sent him funds from as far away as Alaska. Friends who couldn’t make this opening day sent funds as well, by mail and through Paypal. By the end of the week, he had another $400 toward his goal. Imagine that! Over $1200 toward his goal. Amazing.

I have no doubt that Isaac will find a way to bring another child into our family. And in short order. We have plans to set up his lemonade stand at various venues this summer, throughout Bangor. He also has some other fundraising ideas in mind. And though his parents have other thoughts about this, he is determined that his little brother’s name will be Gabriel. I have no doubt that Isaac will be the best big brother to sweet little Gabriel. We can’t wait to meet him.

Again, thank you to all involved. We will keep you posted on this progress via this blog.

For those who would like to contribute to Isaac’s efforts, we will post his address/paypal in the comments section of this article.