I have always loved chickens … not for eating … but for watching, patting and enjoying. They are really amazing creatures. They are intelligent, curious, playful, and have the capacity to reciprocate affection to any human that takes the time to befriend them. In fact, I have 4 pet chickens that will follow me around the yard, allow me to pat them or pick them up, and will sit on my lap and fall asleep while I am hanging out on the porch. (Their names are Nashua, Chicken Jane, Snuggle Bug & Comet).

At this time, we have 30 pet chickens … 28 laying hens of various breeds as well as 2 Black Australorp roosters. All are quite friendly and even allow Isaac to hang out among them (even though he occasionally terrorizes them). We have been keeping these chickens for over 3 years now … and almost all are named. 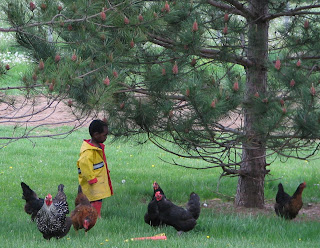 However, now we have taken a different approach to chicken “ranching” … we are also raising some chickens for our consumption. And I am now eating them. Though I was a vegetarian for nearly 15 years, I have been eating some forms of meat ever since Isaac came home. I decided that I wanted my son to be able to eat some meat … and that if he did, we would have to raise it. Thus, the raising of the “broiler” chickens. 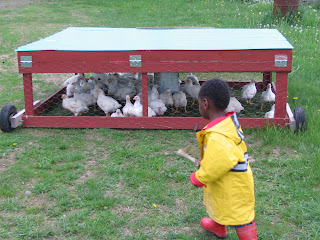 I have to admit that it feels sort of funny to have spoiled pet chickens running around the yard at the same time that we have “feeder” chickens caged up … fattening up … and awaiting their certain demise. And I realize that it may take some creative explaining later on when Isaac begins his questioning. But it really doesn’t feel as strange as I thought it would. Let’s face it – priorities change when you have children. And though I once saw all creatures as being worthy of full and natural lives … and not to be consumed by people … (yadda yadda yadda) … I now have taken the “as my son needs, so shall he have” approach to life. And frankly, that means that if he needs healthy protein, than a chicken must die. And better that it be raised here in a healthy environment, under humane conditions, and fed hormone-free feed, then to live and die in a factory farm. And better that my son eats this than any other chicken or meat available at the grocery store.

Many wise and wonderful Moms that I have come to know throughout my past have made it a point to tell me that many of my strong convictions during my “child-free” years would likely change once I was raising one of my own. Of course, I argued with most of them … professing that nothing could make me change my belief in ___________ (fill in the blank). But now I know they were SO right … as so many ideas that I previously held have totally shifted now that someone calls me Mommy. Subsequently, I must now “eat crow” … or at least some homegrown chicken 🙂