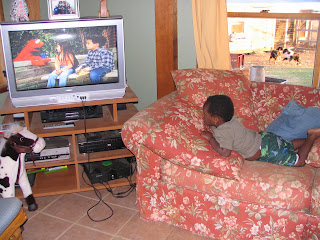 Sunday morning, I got a call from a Neilsen representative and I was giddy. (They even pay you, did you know that?) Finally, we will have a very small (virtually insignificant) say in which television shows will continue and which will be cancelled. The thing is I get giddy anytime that my opinion matters – no matter how insignificant. Doesn’t everyone?

And frankly, though we are not big fans of television at all, I think that opinion should be heard as well. Television can be a wonderful tool and a supplement to one’s entertainment choices … but I feel that life is best lived when it is kept at a minimum (not to mention all the garbage that is on television). However, I admit, we watch a whole lot of Sesame Street and Deal or No Deal. So, if we have anything to say about it (AND NOW WE DO!) those programs will continue for quite some time 🙂