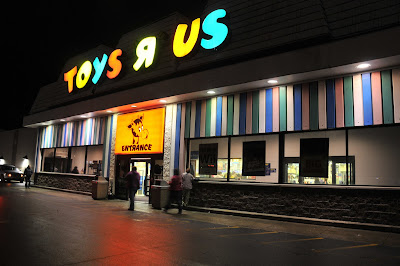 Every year, millions of Americans flock to the After Thanksgiving sales at box stores around the country. I am usually not among them. Mostly because I don’t engage in over-indulging my child, my nieces, and my nephews with low-quality, Made in China, sweatshop produced goods that will be out of vogue just weeks after they receive them (should they actually last that long). But this year … well, this year Toys R Us opened at midnight on Black Friday … and I was there. Not to shop (although I was very tempted by some of the DVDs and did go back later in the day to buy Isaac one of his fave Barbie movies) … but to photograph the mayhem. 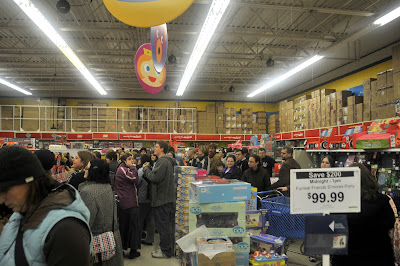 When I arrived at Toys R Us in Bangor at 12:15 AM, the parking lot was completely full as were all the neighboring parking lots. There were police cruisers blocking the entry way of those parking lots that were full … and cops directing traffic from several angles. The line to get into the store was SO long … like nothing I have ever seen before. I called my Mom from my cell and told her I thought maybe Elvis died … as it looked like his funeral procession was taking place (this was funny to both of us – but maybe you have to understand our mutual love for Elvis in order to find this funny). Anyway, the scene was wild. And just as I went to photograph it, I realized I forgot my camera (real smooth Jodi). 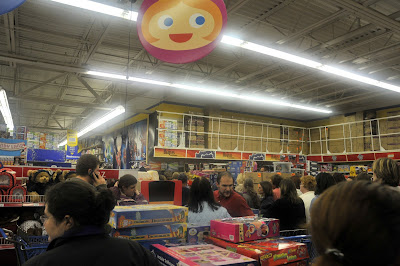 So, I drove back home to get my camera and returned at about 12:35 AM. The line outside the store was gone … but that was because everybody had sardined themselves into the building. I walked in to find that people could barely move. And the isles were filled with people and shopping carts from one end of the store to another. Again, I had never seen anything like it. I was shocked. I wondered what on earth would happen if a fire broke out or some crazy person took out a gun. We would all be trampling all over one another … and there would no doubt be causalities. I also wondered if having this many people in a building was illegal … and decided that it would have to be. 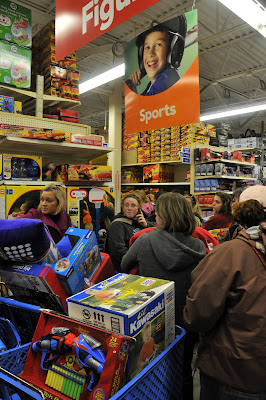 I worried that people would be unkind to one another (the whole ‘rats in a cage’ scenario) … but was pleasantly surprised to find that just about everyone I chatted with or stood near was just as shocked as I was by the magnitude of people there …. that they were all laughing at themselves and one another for participating in this shopping madness. The mood was fairly cheerful. I also found that a great number of folks were from Canada and had come down for the holiday sales (many of whom said they would never do this again — and their shopping day had only just begun). French Canadian accents could be heard in every aisle … as could cell phones … and people yelling across to family members in other aisles … (“Martha, grab me a Three Musketeers Barbie and a I’ll grab you one of these Lego Sets!”). Some folks had this shopping thing down to a science and used cell phones with 3-way calling to spread out and grab everything one another wanted. 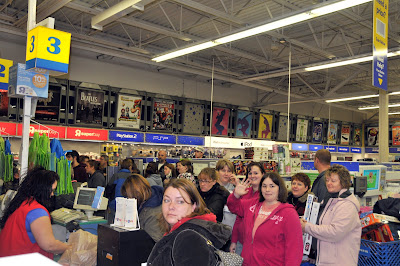 I also watched managers scramble to call in more employees to open more registers. Registers 1 through 8 had lines that went all the way back to the store … and many folks took their chances standing in line at registers 9 & 10 in hopes that an employee or two would show up to cash them out. Those folks were rewarded in their gamble … and when the extra employees showed up … people cheered as though their sons scored touchdowns in the homecoming football game. 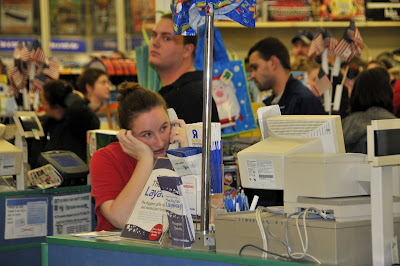 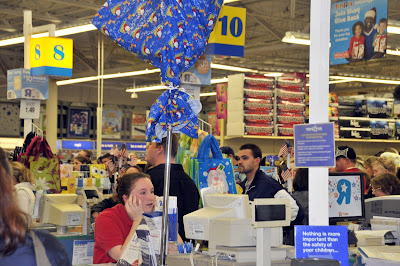 As for me — well, the mayhem was fun to watch. I LOVE watching people. I have always been intrigued by how people behave in groups … react to stressful situations … how they engage with one another … etc. And watching all these folks did not disappoint. First, as always, I left proud of my fellow Mainers for keeping cool with one another … for laughing … for being polite, etc. There were some jerks … as always. And a couple of women fought over a toy helicopter (I only heard but did not see the fight). But for the most part, people were well behaved. 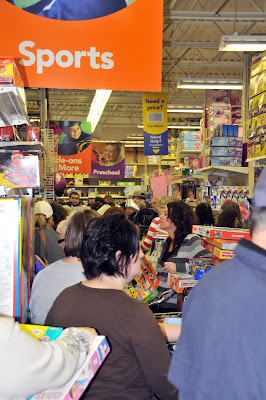 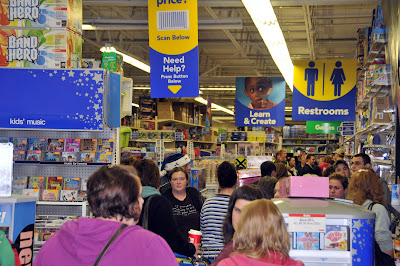 But somehow I was still disappointed in all that I saw that early morning. The whole scene just didn’t feel right. I kept thinking … So, this is Christmas? This is what the holidays mean to these people … filling carts full of STUFF … over-indulging their children with loads of toys that do not matter in the grand scheme of things? Are they purchasing everything their kids have asked Santa for? What does that teach their children? And if you fight over a toy … how can you feel good about giving that toy to your child after? Is it worth it? Do these kids know anything more about the spiritual side of the holidays … or is it all about the STUFF? Are we raising a nation of entitled brats? Or perhaps this sale-induced chaos is all a result of our failing economy? Are these folks just desperate to stretch their dollars in order to make a purchase for each of the children in their lives? And if so, is there another way? 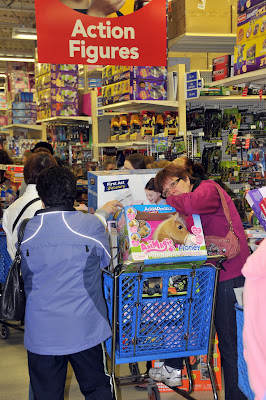 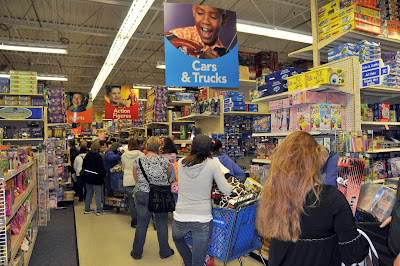 And then I thought of my son … my sweet Isaac … and of the conversation he and I just had about Santa a couple days prior. I told him that I had seen Santa at the mall. I asked him if he would like me to ask Santa for anything special for him. Isaac then walked over to his toy box … grabbed a broken matchbox car … handed it to me … and said, “Can you ask Santa to fix this car for me?”. My eyes welled up. “Is that all you want Baby Boy?” … “Yes, Mom.” And then I knew that either I had been blessed with the most special boy in the world … or I had done something right as a Mom. Likely a bit of both.
I do not belong to any organized religion/faith. But my own personal belief system tells me that every day is sacred. However, we as a society have dubbed certain days as more reverent than others … and I participate in that. Therefore, I see Christmas time (Yule, Hanukkah, Ramadan, Winter Solstice) as a bit more sacred than other days. And I try to react as such. Years ago, we decided as a family that we would spend every Christmas day volunteering somewhere. Last year we chatted with and gave gifts to the veterans at the Maine Veterans Home. It was wonderful (a bigger gift to us than to them I think). This year we have decided to gift several items to our local Ronald McDonald house … as well as to visit the Maine Veterans Home again. THAT is what I want my child to know of Christmas. No matter what faith he decides to follow in his adulthood … all will tell him that it is better to give than to receive … all will tell him that to truly give of himself to others is divine … none will tell him to indulge in greed and constant self-gratification. So — though we are without “church” — we are not without reverence for this special time of year.
I do not for one second suggest that we “know better” or are better than anyone I encountered at Toys R Us that day. But I do suggest that perhaps we — as people — have strayed a bit too far from the reverence that we had once given to the holidays we celebrate together as a nation. I recently read that the United States has one of the highest populations of Christians in the world. This has me wondering how many Christians were shopping at Toys R Us on Friday … and how many of them believe that Christmas is a holy day … their Christ’s birthday. And if so, how do they correlate the giving of massive amounts of toys to their children with the birth of their God?
We all love our children. I understand that. And I know that I love to see my child excited over a new toy. Who doesn’t? I guess I just can’t wrap my head around how self-indulgent we seem to have become … and the “me, me. me” lessons we are showing our children. To my mind, a child will fully appreciate one or two special toys over a cart full of them.
Isaac is getting one toy from Santa this year. As well as a stocking full of “elf-made” goodies. Then we will all exchange some presents with one another (some handmade, some store bought and some bought at area thrift shops) …. nothing bigger than a bread box. We will then share breakfast with one another and head out to share some love and goodies with strangers in need. That is what Isaac believes Christmas is … deciding where to go to help others … and I couldn’t be happier about that. Though I don’t believe us to be the only ones to share of ourselves during the holidays (thank goodness 🙂 … I guess that scene at Toys R Us just had me wondering whether we — as a nation — can ever get back to holidays filled with handmade goodies (made or bought), charitable giving, stockings filled with oranges & candies, more spiritual/religious reverence, less credit card debt, and a bit more “magic” of the season, etc. Perhaps that will be my Christmas wish.

I pray that you all begin to fully enjoy this magical, spiritual, heart-warming season of love, light and fellowship.

Please share with us your special holiday traditions … and how you are working to make the holidays more about love and fellowship and less about material goods.