This past week, our little family took a much needed trip to Boston. “Much needed” in the sense that we needed to get away for a while, just us three, to take a break from the chaos of our lives and simply enjoy one another. But also “much needed” in the sense that Mama needed to revisit the city of her childhood … the city that my Dad took us to whenever we needed a bit of culture, some interesting foods, music, museums, and whenever we just needed to be surrounded by people of all kinds. My Dad and I are kindred spirits … and Boston feels good to us.

I took Meaghan to Boston when she was 6 (still searching for the pics of that trip) … taking the train in from Lowell … for a visit to the New England Aquarium. It was a wonderful day for us … and I figured it was time to do the same for Isaac.

But instead of one day … we took a vacation of three days. One day for each place that I wanted to share with my boy. Day one? The Museum of Science.

As a child, I loved the Museum. As a young adult, I found it boring. As a Mama, I fell in love all over again. Such a huge place full of rich history and exciting innovations.

Here is a bit of what we saw/did:

First stop … Theatre of Lightning … one of my favorite exhibits from childhood … and as relevant today as it was 30 years ago. But not one of Isaac’s favorites. Very loud and a bit over his head. But interesting (again) for both Daddy and me. 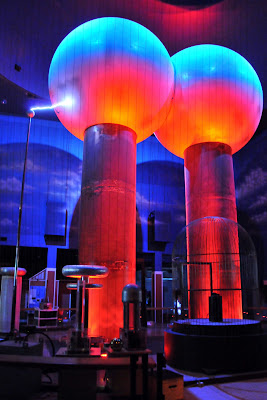 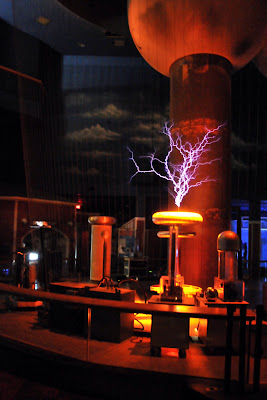 Then, a bit of the old space exhibits that we parents also remembered from our childhood … 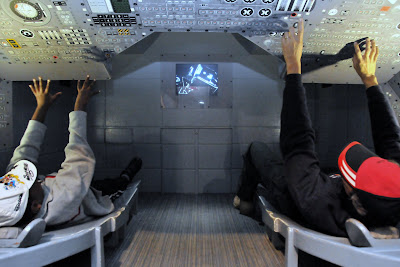 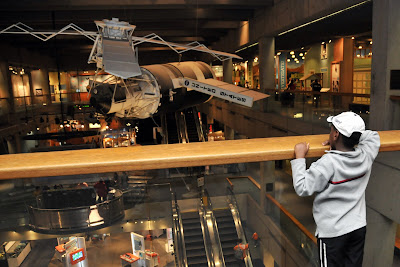 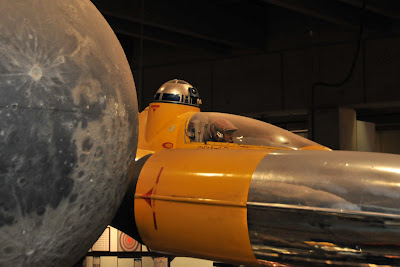 R2-D2 and Luke Skywalker never get old. And since Isaac is a recent convert to the whole Star Wars trilogy … this was a super cool find for him.

Sometime after space … we went over to the Evolution, Human Birth and Anatomy sections. These were my favorite! Skeletons that showed the evolution of the human species … various animal brains in jars (beluga whale brains are awesome!) … a whole exhibit on reproduction that was so well done … baby chicks hatching in a hatchery for all to see … WAY COOL.

And as part of the whole Human Evolution exhibit … there were Tamarin monkeys … live ones. So adorable and fun to watch. And I swear to you … on pain of death by flying monkeys … that we (all three of us) witnessed two Tamarins totally making out. Like for real making out. Lips to lips … smooching. Then they would preen each other … then cuddle … then smooch … and repeat. It was awesome. 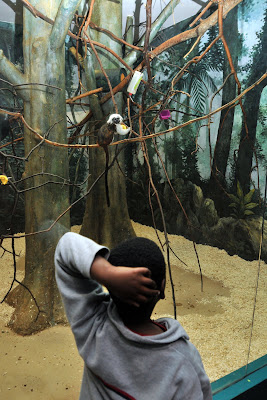 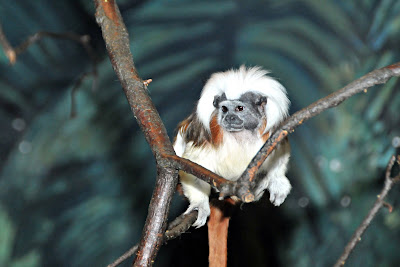 Why Tamarin monkeys? Well, I don’t think we got that far, but the website reads: “Ancient stone tools, poisonous plants, DNA, fossil skulls, and tamarin monkeys all have something in common: they are all clues that help explain why all life on Earth, including humans, evolves over generations.” So if you are interested, check out their site and search for the connection.

Later … after skipping around to various exhibits (we had only a few hours so did much skipping about to the exhibits we knew were a must see) … we found ourselves among dinosaurs! 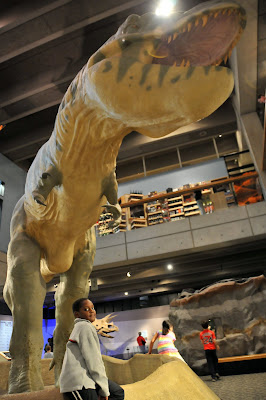 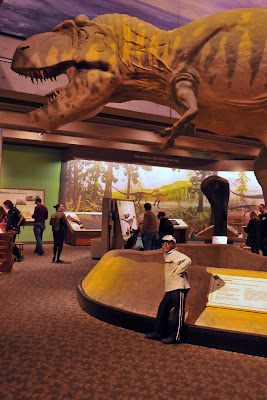 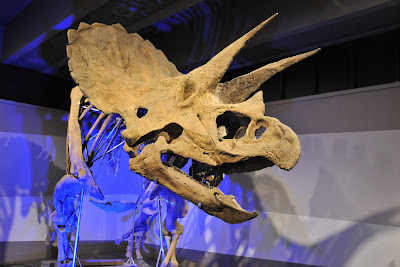 The above dino is Cliff, who is apparently a big deal. He is one of only 4 nearly intact Triceratops skeletons in the world.(I am loving the picture I took of him!) As I looked over his bones, while Halis and Isaac were goofing about somewhere else, I found myself wondering how some people, in order to keep to their religion, have decided that all the skeletons/fossils of dinosaurs are a hoax. Apparently they need to believe this in order for the Christian bible timeline to make sense. I wondered how on earth anyone could pull off such a global hoax … and how people could believe that these bones were planted all over the world for archaeologists to feign the discovery of them. I wondered this in part because I once had a friend who truly believes that dinosaurs were created as a global hoax to usurp Christianity. ANYWAY … while I was wondering all that …
Isaac was simply enjoying them. 🙂 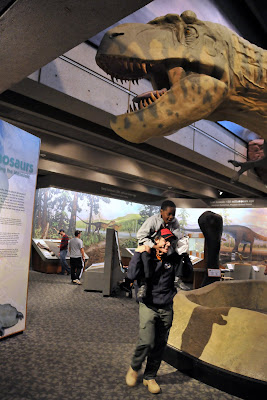 There was so much to see all around us … and so little time (we will definitely go back!). There were so many exhibits that we enjoyed but did not get any pictures of. A fave that comes to mind is the new X-Ray exhibit … where Daddy showed Isaac the x-rays of various animals with various ailments.
I found this amazing rock … 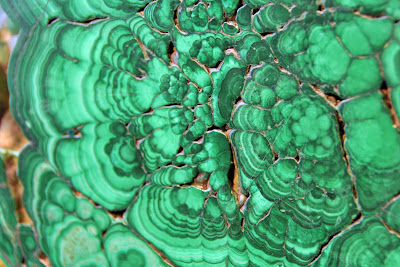 Anyone know what is called? It is gorgeous. I want to wear it all over me!
I also found this enormous piece of artwork that called to me … 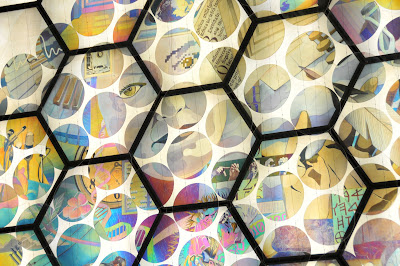 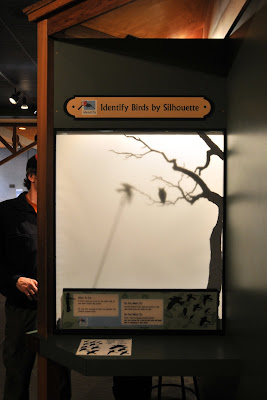 I think I would also like to recreate this in our home too! What a simple, yet brilliant way to learn about birds! Oh, and I just have a thing for silhouettes 🙂
This was Isaac’s favorite … and I really think he could have spent hours at it … watching the mechanics at work … 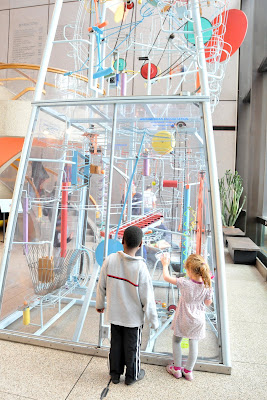 At one point, there were at least a dozen kids watching this piece … and I think Isaac loved it as much for the social interaction as he did for the mechanics of it. That’s my boy.
And at the very end of our visit, I remembered the bees! The bees that I was mesmerized by as a child … so Halis and I made sure to run Isaac up to the top floor to catch a glimpse. And it was worth it … once again … 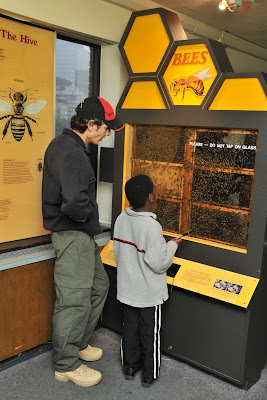 So, there ya have it … a glimpse of what we enjoyed during our first Boston day. We missed quite a bit at the museum … so now have an excuse to return … that and we want to do an overnight in the museum! I want to live out the adventures of Claudia and Jamie … just as I heard them when I was in 3rd grade 🙂 Have you ever done such a thing?
Although we weren’t able to explore any one exhibit in the depth that it deserved, we now have some starting points for homeschool discussion and exploration.

Day Two? The Aquarium! And it was AWESOME! Will post more asap. Thank you for reading & sharing with us.