I cannot begin to tell you just how much I love sharks … have ALWAYS loved sharks. My first visit to the Nashua Public Library was so memorable for me because it was the first time that I could look at loads and loads of shark books without anyone else looking on (my Mom was not so enthusiastic about my shark fixation). Though I was young enough that I couldn’t read all the “big kid” words … the pictures were enough to satisfy me … and I can still see those very pictures in my mind’s eye. Jacques Cousteau? Yes … my hero! Shark Week? Yes please! It is nearly a religious experience for me to sit down to some new Discovery Channel shark specials. Jaws? Booooo (sharks are not nearly so villainous)!

I remember the delicious fear and respect I had when I saw my first shark at the New England Aquarium in Boston. I was about 5 or 6 … visiting there with my parents, their friends, and my little brother. And in the enormous 200,000 gallon Giant Ocean Tank … I watched from a thick, giant viewing window as a large shark swam by … mouth agape … razor sharp teeth … and seemingly within inches of my face. I was scared and awe struck at the same time. And I get that same feeling today … I love them … but have this healthy fear of them that quickens my breath … and raises the hair on the back of my neck. But it is a feeling I relish … and have been lucky enough to experience at several aquariums along the East Coast … Sea World, Mystic Aquarium, Saco Aquarium, … and several returns to the New England Aquarium.

And now … this past week … I was able to take my own boy to that wonderful place … to share my passion for all creatures of the ocean … but most especially to share with him the opportunity to pat a shark in the new Shark & Ray Touch Tank at the New England Aquarium!

Let me first tell you that when I told my son of our upcoming visit to the aquarium … he protested. He WAS NOT GOING. Period. See, if I LOVE something … like Star Wars … he will hate it just to oppose me (though he will secretly watch the entire Star Wars trilogy over and over again and can answer just about any question you may have on the subject). My love for the ocean, and especially for sharks, is well known around here and often the main subject at any dinner gathering … so he would have none of it.

Upon entering the aquarium, it is the first exhibit you walk into … and though it is really so very simple … a petting zoo for sharks and rays … it was AWESOME. And as you will see by the following pictures, I was NOT the only one to think so … 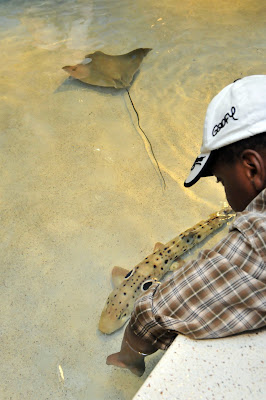 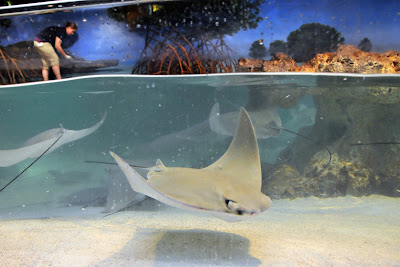 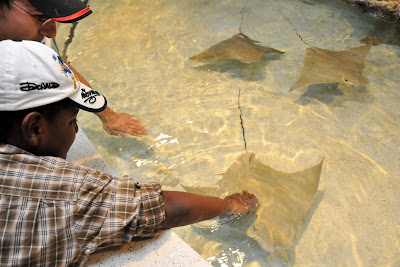 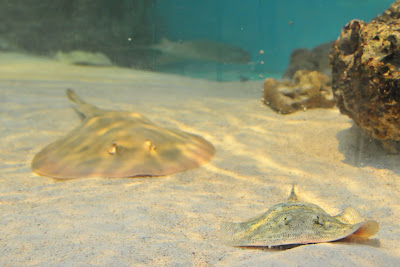 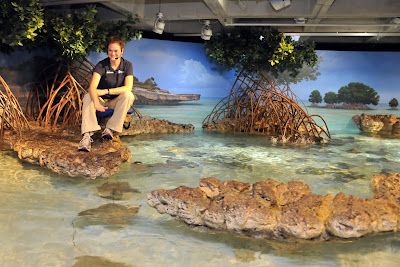 Seriously … this kid could not break away from this exhibit. And I didn’t want to either. Yes, the sharks are harmless and small … but there is something so wonderful about being able to get so close to something so wild and so primitive … 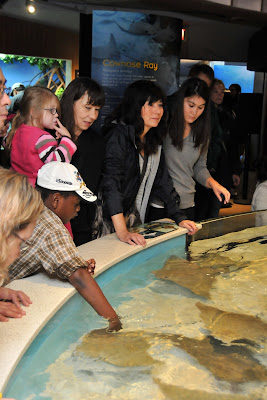 And then there was the thrill of being able to wait patiently for the shy and elusive Bonnethead (you can see it here) and Epaulette sharks to swim up to us. As seen from the first picture, Isaac (and I) was able to touch one. And after being told that it was a rare privilege in that touch tank for the Epaulette sharks to allow you to touch them … we couldn’t resist trying again and again. 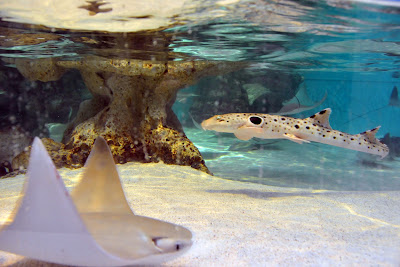 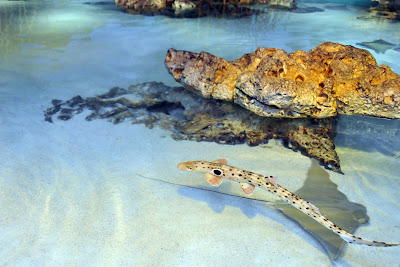 Here is the Epaulette … shown above … and if you have a chance to learn about them … do! They are amazing little creatures. They can even breathe air out of water for a short period of time … and can use their dorsal fins to “walk” across wet sand to nearby tide pools. How many sharks can say that!?

So, after touring the entire aquarium (additional pictures to come in future posts) , Isaac and I went back for more of the sharks and rays … 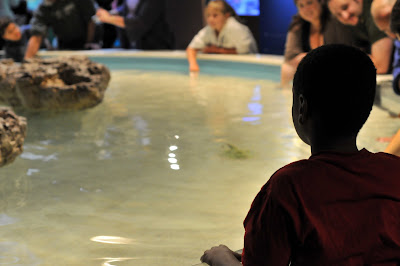 and it paid off … 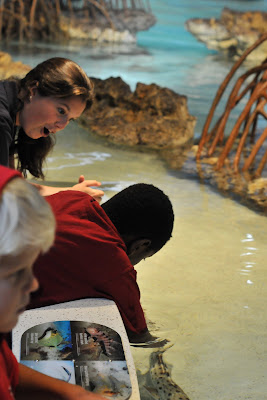 And though he will tell you that he does not like sharks, and that he did not love the aquarium … the truth is, he absolutely loved it … did not want to leave … and asked if we could move there to work at it. Though again, he will deny all of this. But tell him you are about to leave to go to the New England Aquarium … and he will beat you to the car to join you!

It was absolutely wonderful and I highly recommend it. I think it is perfect for showing kids and adults that sharks and rays are mostly harmless (100 shark attacks a year is chump change and a risk worth taking in my humble opinion). I think hearts and minds can be changed with exhibits like this … and I am so thankful for them.

So, thanks NEAQ. You guys rock! And thank you for making sure that everyone handles the animals with care.

P.S. To see more pics from this part of our Boston Adventure, click here.